The Science of Sound.

DO try this at home

Take one slinky and tell a friend to hold one end and to walk away from you until the slinky isn't draping down. Tell your friend to hold his/her end of the slinky on the ground, you do the same. Briskly shake the slinky up and back down to the ground. The wave travelling along the slinky demonstrates how sound travels in waves.

The cup phone demonstrates how sound travels much faster and more clearly in other mediums such as water or string as it does to air. There might not be much need in explaining how to do it but I will anyway. Take two cups, poke a hole through the bottom of both cups and run a length of string through them tying a knot at both ends. Get a friend to take one cup and walk away until the string is taught. Put the cup up to your ear and tell said friend to talk into the cup. What you hear is sound that has travelled through string rather than air. 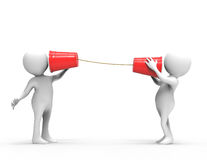 If you have no friends or there is simply no one around, try this experiment which shows the same idea as the one above but this can be done in a smaller area. Take a fork and wrap string tightly around the handle but make sure there are two pieces of string coming off the end. Hold both ends up too your ear and hit the fork off the table. The ringing turns into a bell sound because the sound travels through string rather than air.